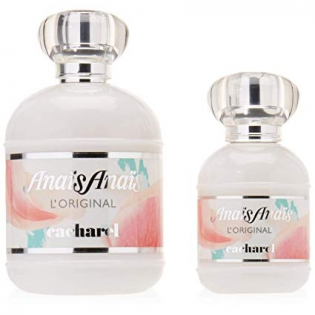 Cacharel's first fragrance, a mythical fragrance with an unforgettable trail.
Floral Green
History :
The youngest and most tender of the great classics of perfumery, Anaïs Anaïs is the bearer of a message of tenderness.
A unique and universal perfume dedicated to the young girls that Cacharel imagines as feminine, soft and sensual.
A fragrance of white flowers, opulent, sensual and full of tenderness: the first fragrance of Cacharel, a mythical fragrance with an unforgettable trail.
There are more than 300 different floral notes captured in ANAIS ANAIS.
The name comes from hannah which means the graceful.
The pretty story also tells us that Anaïs was the goddess in ancient Persia. Anaïs Anaïs expresses the duality of the young woman Cacharel, both innocent and sensual.
The Bottle:
Anaïs Anaïs is the first opaque bottle on the market, made of white opaline, topped with a silver cap at its launch, inspired by the old perfume pots.
The perfumers:
Four perfumers worked together to develop this perfume, using the lily as the main theme, mixed with other white and green flowers to express freshness and purity.

Expected delivery between March 5 and March 12
If you are on leave, upon request we can deliver later. Please inform us by email

Free delivery as of CHF 250.- of purchase *
* excluding champagne and liquors