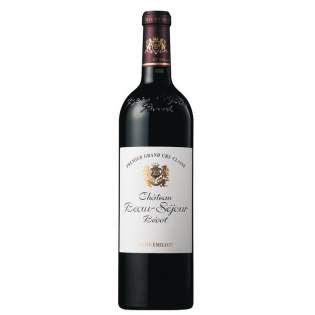 Located west of Saint-Emilion, in the heart of the appellation of the same name, Château Beau-Séjour Bécot is built on the limestone plateau of Saint-Martin de Mazerat. The fertile lands of this plateau have been used for winemaking since Roman times. In the Middle Ages, the monks of the Church of Saint Martin continued this tradition. In 1787, a general, Jacques de Carles, acquired the property and nicknamed it Beau-Séjour, as he enjoyed living there. Built in the 19th century, when the estate was divided into two parts, Château Beau-Séjour Bécot was bought in 1969 by Michel Bécot, whose family had been cultivating vines since the beginning of the century. The latter enlarged the estate by buying plots of the same terroir. He also built underground cellars covering 7 hectares in an old limestone quarry to store the barrels. This entirely natural cellar contributes to the success and renown of the wine. Since 1985, his two sons, Gérard (in the cellar) and Dominique (in the vineyard), have been managing the estate. They have brought their own touch to it, namely the renovation of the technical installations and a greater rigour in the work in the vineyard and the selection of the grapes. The famous oenologist Michel Roland participated in the elaboration of the new Beau-Séjour Bécot, confirming in 2012 the classification of Premier Grand Cru Classé B in Saint-Emilion obtained in 1996. Since 2001, Gérard's daughter Juliette has joined them to take care of the commercial aspect. The 2016 vintage is the first one elaborated with the help of Thomas Duclos, from the Oenoteam laboratory, promising a true revelation.

Today, Château Beau-Séjour Bécot has 18.5 hectares of vines and a homogeneous set of clayey-limestone soils with asterias. The harvest is done by hand and the average age of the vines is 40 years. The sorting of the grapes is severe: only the best and ripest are chosen individually. Merlot is the dominant grape variety, followed by Cabernet Franc and Sauvignon. Many critics have praised the progress made in recent years by the Bécot family, including the RVF, Gault&Millau, Bettane&Desseauve, as well as Robert Parker.

Château Beau-Séjour Bécot is one of the wines with the most marked aromatics due to the limestone and oak trees located in the appellation. The Merlot comes out enriched and opulent with black fruits and cinnamon. On the palate, flavours of cherry coated with chocolate, plums and smoked tea join those of the background, mentholated and mineral. The tannins are finely chiseled and the finish is lingering.
Abuse of alcohol is dangerous for your health, please consume in moderation.
Sale prohibited to minors under 18 years of age.