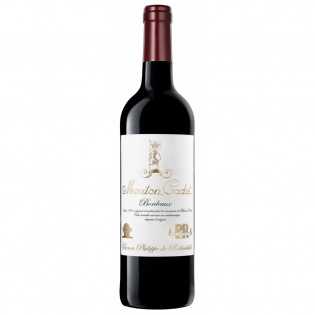 About the Domain
Mouton Cadet is immutable in its consistency. It is in no way comparable to Mouton Rothschild, nor is it his second wine. However, many wine lovers appreciate its round and supple character, and the fact that it is produced with the know-how of a great château. MC is one of the most widely distributed brands in the world, with millions of bottles sold each year. Mouton Cadet is the first branded wine, created by the Rothschild family in 1930. That year, Baron Philippe de Rothschild decided to declassify his wine and sell it under the name Mouton Cadet. It was an immediate success. At the time, it was still a Pauillac. In the following years, there were not enough grapes, which had to be bought in other communes and wine regions. So Mouton Cadet became a Bordeaux, produced every year. Its success did not diminish and a white Mouton Cadet was created in the 1970s. There is even today a rosé version.

About the cuvée
Mouton Cadet is a medium-bodied Bordeaux, ideal to drink very young. It was created to be consistent and reliable vintage after vintage.
Abuse of alcohol is dangerous for your health, please consume in moderation.
Sale prohibited to minors under 18 years of age.